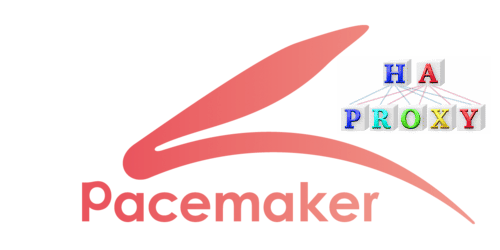 Here I’m going to setup high-availability features in our current infrastructure. I will add a new HAProxy node and will use pacemaker.

In this article, the high-availability for the load-balancers is very critical. I’m going to use the existing infrastructure and set up pacemaker between the 2 HAProxy nodes. Pacemaker is the resource manager and corosync is the heartbeat (communication layer). 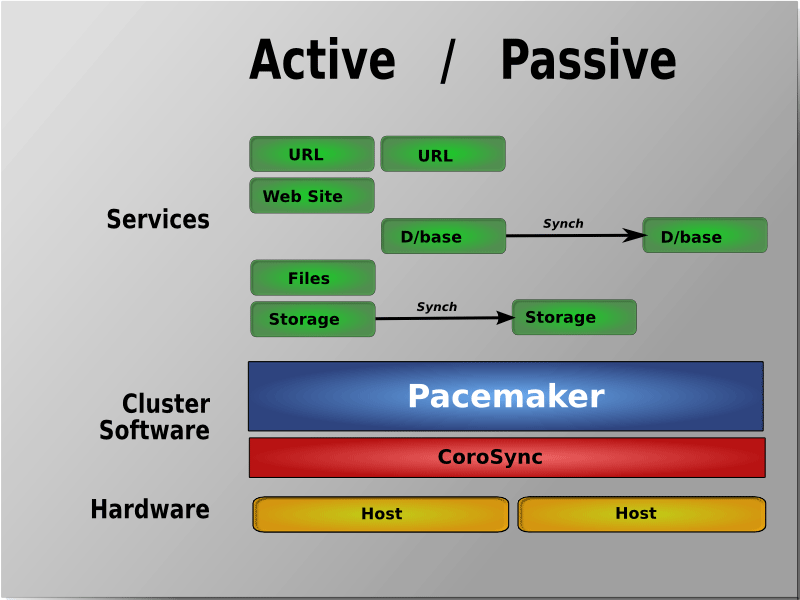 Reminder: the active/passive cluster consists in using 2 servers or more, only one node has the resource started. When the current owner of the ressource goes down, a failover is operate and the resource will be running on an another node.

Here is the topology:

We allow the start of corosync during the boot sequence and by the INIT script:

Same thing on the second node:

Generate an authentication key for Corosync:

It’s possible that you will have an issue using a SSH connection on a distant terminal. If it’s the case just generate random IO entropy with this line (run it on an another terminal):

Be careful the bindnetaddr parameter is always a network or a sub-network. We copy the key and the configuration on the other node:

We run the corosync daemon on each node:

We test the connection between the nodes:

Nodes are properly connected but not configured yet.

First of all, we have to setup the IP failover. Corosync will check every seconds if the other node is still alive. If the other node become unreachable, the current node will take the lead and the virtual IP address will target the new node.

Here I simply created a primitive with the IPaddr2 agent, assigned a virtual IP address and set one second interval check. I also disable STONITH and the quorum policy.

Here we are managing the behavior of the HAProxy daemon. If a node is assigned as active the resource have to failover or failback. Since Pacemaker doesn’t provide a resource agent for HAProxy, we have to use a LSB agent using the INIT Script. Pacemaker will manage the start-stop-restart of HAProxy directly from the INIT script.

You certainly already noticed that I disabled 2 pacemaker features and add the resource stickiness option:

In this section, I’m going to stress this architecture. I was needed to answer to a few questions like:

Here some tests I runned:

See the failover duration below:

Here I suddenly stopped the HAProxy daemon, this one will be automatically restarted by corosync. I recorded the output in a text file called haproxy-stop-start.txt. At the beginning the raw output was:

I used this oneliner to custom the output:

Here it’s quite simple, I stopped corosync on the node 01, the resource should failover to the node 02. I used this command to trace:

It took 3 secondes to reconnect.

I just unexpectedly moved the resource to an other node. The resource was lead by the node 02.

How did I migrate the node?

I performed this check:

I re-used my duration calculator:

This time it only took 5 centisecondes to perform the hot migration.

I just stopped the MySQL daemon on the node 02:

I was a little bit worried about the duration, 3 seconds, especially for a virtual machine, it’s too long. Then I thought that was a HAProxy parameter. If you want to improve your failover duration you have to play with those parameters:

Quote from the HAProxy documentation:

If the server is located on the same LAN as haproxy, the connection should be immediate (less than a few milliseconds). Anyway, it is a good practice to cover one or several TCP packet losses by specifying timeouts that are slightly above multiples of 3 seconds (eg: 4 or 5 seconds). By default, the connect timeout also presets the queue timeout to the same value if this one has not been specified. Historically, the contimeout was also used to set the tarpit timeout in a listen section, which is not possible in a pure frontend.

I even tried to use lower parameters:

I got those times values:

That’s generated a MySQL issue, maybe due to a short timeout. Finally I was able to double speed the failover duration.

This is the most important question

“What will happen if a failover is operating during a commit in the database?”

The only thing I was able to notice was:

At the end, this failover cluster offers a great high-availability and keep the data consistency well. Next time I will use the same setup with a custom resource agent and I will also use Keepalived which is simplier to setup.