MySQL/Galera is synchronous multi-master cluster for MySQL/InnoDB database. The application which commonly had access to your cluster can commit on each server, then Galera will replicate all the data accross the whole cluste. A commit is called an RBS event. For the high-availability purpose Galera needs a minimum of 3 machines even if it is able to work with 2 nodes. There are several replication methods like mysqldump (default) and Rsync. In order to manage the queue and the replication system, Galera uses a Certification-based replication feature. This functionnality provides an alternative againts the classic replication methods. 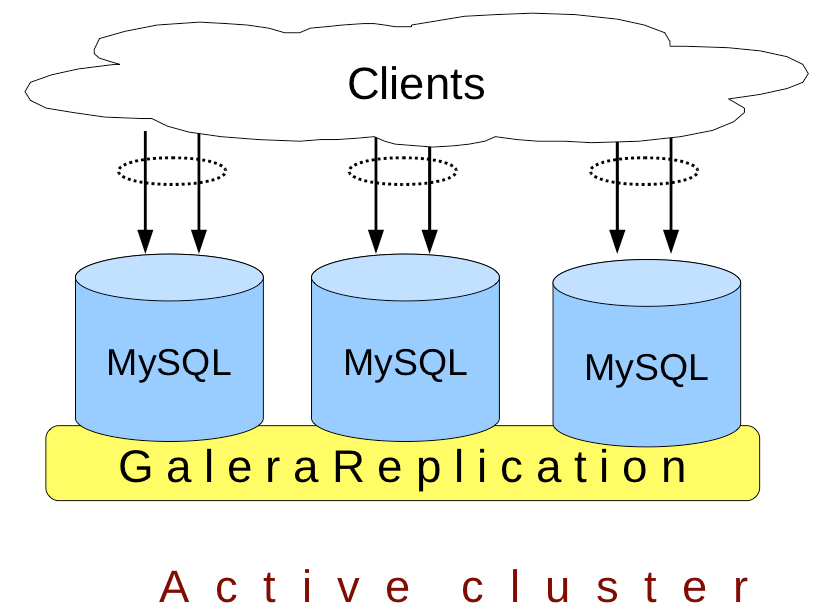 If you want to know more about the topologies you can built, see this page et ici

At the end we have:

Modify the bind-address parameter with the host-only NIC (eth1):

The sed command simply does this on the node 01:

We configure the Galera replicator in /etc/mysq/conf.d/wsrep.cnf with:

On the second node:

We kill the temporary process and relaunch MySQL from the INIT script:

Enter the MySQL shell, check the MySQL and wsrep version:

For the whole value details

The most important value is:

The simpliest way to avoid any split-brain situation is to setup the garbd daemon like so. Ideally the daemon will be running on an extra server, a load-balancer for example:

Simply choose one of your 2 nodes and garbd will do the rest. It will automatically connect to the second node and will be a member of the cluster. Thus your wsrep_cluster_size variable should be 3. If the dedicated link between the 2 nodes goes down, garbd will act as a replication relay, this can be really useful.

This script will perform a simple check of your galera state:

The connection is well established between the nodes:

Here the 10.0.0.10 address is the address of the third machine, the one which host the garbd daemon. Check the replication by creating databases, tables and fields :).

Important note: when your 2 node replication is setup, change the address of the node with this gcomm:// address by gcomm://other_node_address. You only have to use this address during the installation process. In our setup, it’s the node 01.

At the end you should have this:

If the node 01 goes down, the second node will continue to perform commits, when the node 01 will get back to life it will automatically synchronise with the node 02 and vice et versa. A kind of ‘cross replication’.

Since the 0.8 version Galera provides the SSL replication, it prevents man-in-the-middle attacks and also a powerful authentication system based on certificates. It’s a really convenient way to allow specific nodes to connect the cluster. For this purpose we have to active those options:

Generate your certs and copy them to the others nodes:

We also modify the /etc/mysql/conf.d/wsrep.cnf file and enable the wsrep_provider_optionsparameter:

Be careful, here we have to restart from the beginning. Why? If we configure SSL, it means we have to do it on each server. Thereby we will modify each configuration file for each server. What will happened?

Un-allowed node will end up with this log message:

We re-create the cluster! Now launch all the node one by one. During the connection, here some trace about ssl negociation:

We can also check that in MySQL, this is not the real output, I just kept the lines which make sense:

Actives connections between all nodes:

After my Galera Cluster was up and running, I had plenty of questions, some of them:

Split-brain is a state in which all the nodes of a cluster cannot determinate there membership. If a node is down for a couple of second due to a network issue, an other may think that this one is down and want to take the lead and launch the service. Each node in the cluster may mistakenly decide to run the service but the others nodes are still running. This will cause data corruption and duplicate instance. The solution offered by Galera is to use a little daemon called garbd, a stateless daemon create to avoid split-brain. This daemon is a part of the Galera replicator. As I previously said, the garbd daemon will be a member of the cluster and can act as a replication relay if the dedicated link between the nodes goes down.

III.2. What happens if a node goes down?

No matter your topology (2 or more node). For example, if the node 02 goes down, the one with the gcomm://another_node_ipaddress, the data will keep be replicate to the other node. When the node 02 will go back, the data will be commited.

For this purpose you have to change a variable in MySQL:

For listing the whole options simply use:

Check all the parameters here

In my next article, I will setup HAProxy on top of this cluster. HAProxy will provide load-balancing and a virtual IP address.